Hoofsure for a healthier herd, farm and farmer 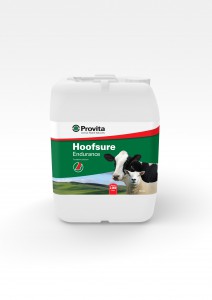 Research in America has found that copper has reached toxic levels in soils due to copper sulphate being used in footbaths. It was reported at the recent International Lameness Conference that fields which have gone toxic can no longer grow alfalfa.

Another study estimated that an irreversible toxic level could be reached within 30 years of copper sulphate being used regularly in footbaths. This development must be taken seriously as copper binds with soil so when a toxic level has been reached it cannot be undone. Farmers who are using copper sulphate in their footbaths should consider doing a soil test to find out if their copper levels are too high or are rising, and think about a safer effective alternative.

Formalin has been considered carcinogenic by the International Agency for Research on Cancer since 2004. It is toxic by inhalation and absorption and as little as 30ml ingested can cause death. Farmers using this product in footbaths should do so with great care to protect themselves and their workers from its toxic effects. Again a safer effective alternative should be considered.

One such alternative is Hoofsure Endurance. It is non-toxic and is therefore safer for the user and the environment. Copper sulphate has been considered the benchmark by which all safer alternatives have been measured, however at the recent International Lameness Conference, Hoofsure Endurance was shown to be just as potent. This was a first in a split footbath controlled study.

This study and local farmers in Northern Ireland have found that when Hoofsure Endurance is used daily, at the correct dilution rate, depth etc. it can help reduce lameness by on average 50% within 6 months when used as part of a lameness control plan.