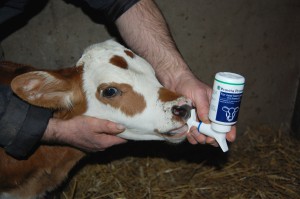 Stephen Glenn milks 200 cows with his brother Philip and father Leslie near Carryduff in Co Down. Calving takes the place the year around, apart from the months of June and July. Up to three years ago the family would have had trouble with young calves and, in particular, an issue with scours when they were put on to powdered milk, after having received colostrum.

“We were advised to dose the calves with the probiotic product Provita Protect, Stephen explained.

“And we haven’t looked back since. The calves receive two squirts of the product into their mouths at birth and then a single squirt on each of the following two days. This approach certainly settles their stomachs as we have not had a problem with scouring calves since we started using Protect. Naturally good hygiene is practiced as well.”

Probiotics, just as important as antibodies

Recent, independent research has confirmed just how exposed newborn calves are to picking up disease. For example, on average, it will take a young calf up to three and a half hours to get its first suck. And before it even finds its mother’s teat, it may well have already sucked her tail, leg and other body parts. As a result, the young calf will ingest a large number of bugs – Salmonella, E Coli etc – before it receives one drop of colostrum.

“It is crucially important for a young calf to get colostrum as soon as possible after birth,” he explained

“Provita Protect, our licenced medicine, when administered to a calf within the first few minutes of life, serves to fill the young animal’s gut with billions of naturally occurring, beneficial bacteria. This helps to physically exclude harmful pathogens from attaching to the gut wall.”

“Probiotics occur naturally in cow colostrum and play just as an important role in preventing calf scour as antibodies. Protect contains a large number of natural probiotics, similar to those found in cow colostrum. It is the only probiotic proven in medicinal trials to reduce scours in young calves and is a totally unique product in terms of its efficacy, quality and stability.

“The Protect strains survive the stomach and work deep in the gut where infections occur.  Trials have confirmed that the use of Protect will reduce calf scours by 83% and increase average calf growth rates by 31%.”

“However for Protect to be successful it must be used from the start of calving even when there is no sign of scour as waiting until there is a problem is too late. Used this way the product can help reduce the build up of harmful bacteria on the farm,”