Every Cloud has a Silver Lining! 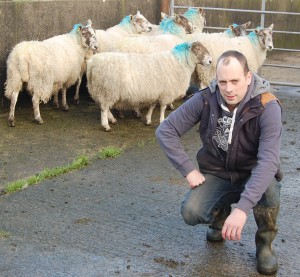 David Jardine and his brother Jonathan own and manage a combined commercial sheep and pedigree Limousin cattle enterprise, near Dromara in Co Down.

“For the most part, I look after the sheep, which leaves Jonathan to concentrate on the cattle,” David explained.

The sheep enterprise is made up of 300 top quality mule ewes, which are crossed – in the main – to Texel tips. This year, two thirds of the flock will lamb at the end of February with the remainder giving birth a month later.

“We bring the ewes in a month before lambing and feed concentrates according to the number of lambs each is carrying,” David further explained.

As is the case on every farm, the New Year brings high expectations for the months ahead. However, any mention of the year that was 2013 brings an immediate frown to David’s face.

“We lost a significant number of lambs in the snow that fell last March,” he confirmed.

“But perhaps worse than this was the impact which the bad weather had on the ewes’ milk output. A lot of the early lambers went dry shortly after the storm hit. And we put this down to the stress they endured during the snow and its aftermath.

But every cloud has a silver lining. And for David Jardine this came courtesy of the tremendous condition that his breeding ewes were in come the back end of last year.

“For the most part, I put this down to the fact that we drenched the stock with Provitamin which supplies very high levels of minerals and vitamins, initially in May and then again at the beginning of the autumn.  This was the first time that we had opted for an initial drench early in the year. Our thinking in so doing was to give the ewes a boost after the cold snap.

“And it’s an approach that has paid a handsome dividend. I had noticed that the ewes looked in tremendous condition when the tips went in at the end of last September. But I was still surprised when the scanning results for the initial lambing group confirmed a pregnancy rate of 2.1 lambs per ewe. This is a record figure for the farm!”

“Both Jonathan and I attribute the fertility boost to the combined action of the double administration of Provitamin. And it’s a practice we aim to repeat in 2014.”

Given the scanning results for the first lambing group, David is fully aware that he will have plenty of triplet lambs to cope with come the end of February.

“It has always been our policy to stomach tube all our triplet lambs with Provita colostrum as soon as possible after birth,” David commented.

“It is the only way we can guarantee that each lamb receives the amount of colostrum it needs to receive full immunity from disease during those all important days after birth.

“The product is easy to mix and it can be administered very quickly. We have used the Provita colostrum on the farm for the past ten years. So we know that it works!