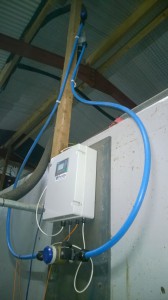 Provita has confirmed that it is now providing a bespoke consultancy service with regard to the design and installation of footbathing facilities on dairy farms throughout Northern Ireland.

“Increasing numbers of milk producers now recognise that they must footbath their cows on a daily basis, in order to ensure that optimal levels of hoof health are maintained. But, as is the case in relation to all other aspects of their activities, they need a ‘solution’ that meets this requirement in the most effective and the least time consuming manner. Indeed a recent survey showed that over 80% of farmers didn’t know the dilution rate of the footbath solution there were using, so we need a simple solution to solve this.” explained the company’s Tommy Armstrong.

“In response to this demand we have developed a foot bathing design model which is sufficiently flexible and robust, in order to meet the needs of all milk producers and their specific milking parlour  lay outs. In general terms the new concept comprises a double foot bath arrangement in combination with a dilution pump and electronic control box. The end result is a system that provides for a pre wash of the cows’ feet in water, followed by their passage through a foot bath solution that is maintained at the correct depth and dilution courtesy of an electronic control mechanism. “

The new design has already been installed on the Coleraine farm of William and Andrew McCollum, owners of the renowned Ballycairn Holstein herd.

Tommy Armstrong takes up the story:

“We were approached by the family in January of this year in the wake of them installing a new milking parlour,” he explained.

“The challenge was one of ensuring that the milking team on the farm could ensure that the 300-strong milking group could pass through the foot bathing system with the minimal amount of fuss directly after leaving the milking parlour.

“The double foot bath concept is now one that is widely accepted as being the arrangement that is most fit for purpose in terms of meeting modern dairy farmers’ management needs. And, in this regard, we have strongly recommended the use of the precast baths manufactured by Moore Concrete. The standard arrangement is to place the baths in line: the first contains fresh water only with the second containing the active solution. A key attraction of the Moore footbath is the bung placement and the ease with which these can be removed.

“The nerve centre of the new footbathing concept is the electronically controlled dilution pump, the design of which has been specifically developed by Provita. This unique arrangement ensures that the level of solution in the footbath is maintained at an optimal level, as is the dilution rate of the Provita Hoofsure Endurance , the active ingredient in the second bath.

“Currently, the new foot bathing arrangement on the McCollum farm has been set up to allow two complete passes of the entire milking group, prior to washing out and re-filling the foot baths.”

“The footbaths can be purchased from Moore Concrete,” he further explained.

“We will supply and install the dilution pump plus the control box.”

William and Andrew McCollum manage the 300-cow herd of Ballycairn Holsteins and replacement heifers at their farm just outside Coleraine.  William initially founded the herd in the early 1970’s. However following a disease outbreak it was depopulated and re-established again in 1998 with youngstock purchased from the UK, Holland, Germany, Denmark, Canada and Italy.

The aim of the new herd was to focus on performance and profitability with heifers being selected for high production potential of milk, fat and protein.  These included daughters of Mascot and Delta Webster which delivered high yields in the first lactation. However the McCollums realised that as a result of this drive for production, fertility and other management issues became evident.  On the other hand, daughters of bulls such as Novalis, Lord Lily, Rudolph and Mtoto while producing less milk in their first lactation were easier to get back in calf again, producing more milk in second and subsequent lactations.

Breeding policy in the herd is now firmly focussed on a balance of improving health and fitness traits, together with good functional udders, legs and feet, alongside milk, fat and protein. The quality of the Ballycairn Herd and the excellent results achieved are testimony to the success of the breeding policy.

“We have always recognised the need to minimise lameness and related feet problems at minimal levels,” Andrew McCollum commented.

“And, up to a point, we can meet this requirement from a breeding and nutritional point of view.

“But, obviously, there is also a requirement to have the cows foot bathed on a regular basis. Given that we had invested in the new parlour, we approached Tommy Armstrong with the objective of developing a foot bathing arrangement that met our current and future needs.

“Over the past number of months, we have worked closely with the Provita team in helping to make this happen. And we are truly delighted with the results that have been achieved.”

Tommy concluded “Filling the footbath with the right amount of solution and the right dilution rate to the right depth every time can now be done with just the press of one button.”

From: Product Information
No comments yet