Foot bathing after every milking reduces lameness problems by 50% 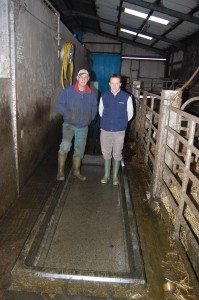 The combined approach of foot bathing after every milking and the inclusion of Provita’s Hoofsure Endurance as the foot bathing solution, has allowed Ballymoney dairy farmer Brian Knipe and his father Alfie to reduce the levels of lameness within his 100 strong cow dairy herd by almost 50%.

“I am delighted with the results obtained by putting an increased emphasis on foot bathing,” Brian confirmed.

“I had known for some time that increasing the frequency of foot bathing would be required if we were ever to get on top of the problem. The challenge was working out the best way to make this happen without putting additional stress on me and the other people working on the farm.”

The answer to Brian’s problems came in the shape of a Moore Concrete precast concrete footbath, which was set into the floor of the cubicle house on the farm.

“The bath, which is two metres long and 1 metre wide, can be emptied in seconds simply by removing the bung. The contents of the bath simply drop down into the slurry tank below. After scraping out the sediment left in the bottom of the bath, it can be quickly filled again with a power hose which is nearby.

“The footbath has an internal depth of around 8 inches. We normally fill it to a depth of 6 inches. This ensures that the solution gets to all the relevant parts of the cows’ hooves, while none of it is wasted through splashing and overflows.  The solution in the footbath is changed every four to six milkings, depending on the number of cows walking through it on a daily basis.

“Research has shown that if dairy farmers want to get on top of lameness problems, such as digital dermatitis, they must footbath all the relevant stock on the farm. And this includes the milking group, dry cows and in-calf heifers. Brian has recently added foot baths in most of his other sheds, including one for heifers and one for dry cows.”

“Brian has come up with a very effective solution to the challenge of ensuring that cows are foot bathed after every milking. Veterinarians now regard digital dermatitis and other related issues as being akin to ‘mastitis of the feet’. Farmers will always dip their cows’ udders after every milking to prevent mastitis. So it is important to have the same level of commitment when it comes to keeping lameness issues at bay”

“I had occasionally stopped foot bathing during summer months however I noticed that our cases of Digital Dermatitis had risen during these times. I now ensure that it is done a regular basis. Buying the footbath, placing it adjacent to the milking parlour and using it every milking was one of the best investments made on the farm!”