Lameness problems on the increase in sheep flocks 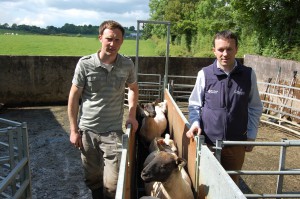 The recent boost in grass growth rates has led to increased lameness problems within sheep flocks,” according to Provita’s Tommy Armstrong.

“The problem is caused by taller stands of grass irritating the skin between the claws,” he added.

“If left unchecked, this can lead to the development of foot rot. Both ewes and lambs are equally predisposed to these problems at this time of the year. And, of course, prevention is better than cure.”

In order to make this sentiment a reality, Armstrong is encouraging flockowners to foot bath their sheep on a regular basis.

“Every two to three weeks is recommended,” he confirmed.

“This constitutes the very essence of the preventative approach that is required to scald and foot rot at bay. If possible, sheep should be put back out on to pasture that Has not been grazed by a flock during the previous two weeks. This helps break the cycle of infection.

Co Armagh sheep producer Denver McCall agrees. His 400 strong flock of Suffolk cross Mule ewes are crossed with Texel tips. Lambing gets underway at the beginning of April. Lambs are weaned at between 13 and 14 weeks of age.

“Foot bathing should be an integral part of the flock management procedures followed,” he said.

“And it can be easily included in the routines followed at dosing, drenching and clipping times. It only takes a relatively short period of time to run ewes and lambs through the foot bath.”

Like many other flockowners in Northern Ireland, Denver uses Hoofsure Endurance, the unique footbath solution from Provita,

Tommy Armstrong was a recent visitor to the farm

“Endurance can be used at the normal concentration rate of 1%: that’s 1 litre of Endurance made up to 100 litres of footbath solution,” he said.

“However, a recent research trial has confirmed that when used at a 2% concentration rate, the product will significantly improve 68% of all lameness related problems within flocks.

“A number of flockowners put a sponge mat on the bottom of the bath. As a consequence, there is less splashing and waste. In this way, farmers can get more sheep through the same footbath mix.”

In contrast, Tommy Armstrong also pointed out that formaldehyde is now officially categorised as a Category 1B carcinogen.

“Its use in foot baths may have insurance implications for the farmers in question,” he added.

Tags: footbathing, lameness, sheep lameness
From: Uncategorized
No comments yet