Developing a plan to prevent lameness

by Provita Animal Health on September 7, 2016 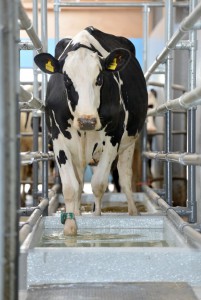 ‘We have a global lameness crisis in our dairy industry’ (Cook 2016). This statement was made during a keynote speech by Nigel Cook, at the recent World Buiatrics Congress in Dublin, Ireland. It was sentiment and focus of numerous speakers at the congress. Given the number of delegates who attended the lectures on lameness it is clear that the matter is high on the priority list of veterinarians and farmers alike.

Despite extensive knowledge of lameness and the preventative measures available for the condition, doubts have arisen over how successful farmers are at footbathing, mobility scoring and how adaptable they are to the changing shape of their responsibilities. With the average UK milk output per cow and average herd size having increased by approximately 20% and 30% respectively in the last 10 years alone, it can be assumed that lameness levels and stress on cows feet are set to also rise (Dairy Co Datum 2014). With studies showing that only 2.8% of footbaths are done effectively, this is rather worrying.

It has been suggested that not only has the size and shape of farms altered but so have the roles and responsibilities of farm owners, workers as well as vets and other contractors (Alcock, 2015).  Sibley (2013), outlines how vets now treat fewer lame cows and play more of an advisory role while paraprofessionals and farmers now do most of the practical foot-trimming.  Based on the rapid spread of Digital Dermatitis it is no longer an option to disregard, or not address the problem correctly. It is important that farmers are aware of the severity of the problem, and act accordingly.

Recommended plan for detection and prevention:

Producers often do not recognise lame cows until they suffer from severe stages of lameness (Schindhelm et al, 2016). Provita recently launched a new app, and a lameness control program called Hoofsure HELP which is designed to assist farmers taking action against lameness problems on their farm. This will allow farmers to see a complete picture of lameness and digital dermatitis on farms, and address the symptoms appropriately. For clients who are using or who are wishing to use Hoofsure Endurance footbath solution a member of the Provita team, fully trained by industry experts, can carry out an on-farm lameness and or digital dermatitis assessment using the new Provita Digital Dermatitis App. If a farmer is confident enough to use the app themselves, then a link can be sent directly to them. Entry of the data is quick, accurate, and an instant report is generated to allow for earlier intervention. The correct use of Hoofsure Endurance will be demonstrated in order to ensure that the depth and dilution rate is correct. The dairy farm client can use all the information to identify underperforming cows, repeat chronic cases and cows which can be classed as do not breed from. This service can also be used to monitor how individual cows respond to treatments and how the overall herd responds to a recommended footbathing plan.