The autumn calving season is well under way and unfortunately many herds will be forced to calf inside and remain inside for longer periods due to the unforgiving weather and grazing conditions.  Keeping newly born calves in at this time is certainly sensible but it could bring unwanted disease challenges in the incoming days and weeks as calving environments become repeatedly used and cattle numbers increase in the same space.  So it may seem the initial weeks of calving period are “easier”, with little issues to report, but this can quickly switch once calving numbers peak and environmental pressures of scouring causes bugs to reach levels able to cause infections.  Therefore appropriate management is needed to mitigate these circumstances. 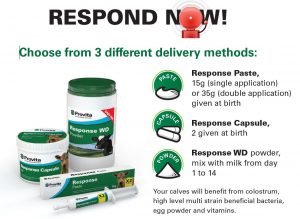 Provita’s Response range can be used during periods on farm when disease outbreaks traditionally occur.  Invariably this will happen between 7-14 days of age and it is not coincidental.  This is during a time when there is an immunity gap for the calf, when passive immunity from the maternal colostrum weans and the calf slowly starts to build up its own acquired immunity.  This “immunity gap” is a high risk period for infection so calves will need particular attention to push them through this period with no setbacks.

Dave Johnson from Harcourt Farm in Shrewsbury has been milking cows for 20 years.  He uses Provita Response calf paste on all his calves as soon as they are born. He explains that he does so to cut down his use of antibiotics and rehydration products – his motto is ‘Prevention is better than cure’.    Dave values his young stock and rears all his own heifers and believes that Provita Response calf paste gives them the best start.

Andrew Ladds from Benson Hall Farm in Kendal, Cumbria is also an advocate of Provita Response calf paste.  Milking 150 Dairy cows and keeping all his calves means he requires a product to counteract common deficiencies that can cause calf scour.  Andrew explains that he has learnt the hard way by losing two valuable calves when he switched to a different paste and now insists on Provita Response paste. He gives all his calves Provita Response paste as soon as they are born and it works to help keep them clear of scour.

Dairy farmer Emma Roskilly from Cornwall states, “I swear by Provita Response Paste. We have tried other products but none proved as effective. We now use it to give our calves a boost after scours, in stressful times like weaning and as an insurance policy to ensure that our calf survival rate is as high as possible.”