Comments Off on Hoofsure Endurance: Tried and Tested against Copper Sulfate and Formaldhyde

Hoofsure Endurance: Tried and Tested against Copper Sulfate and Formaldhyde 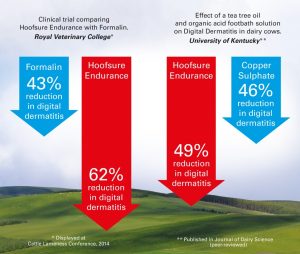 DAIRY WINTER HOUSING:  GETTING ON TOP OF LAMENSS AND KEEPING IT LOW

Andrew Dale milks 110 Fleckvieh and Fleckvieh-cross cows near Limavady in partnership with his parents.  Rolling yields are around 6,500 litres with the aim to breakthrough 7,000 litre threshold soon.  The farm is focused on maximising output from forage with extended grazing and quality silage made.  Zero grazing has been introduced in the past two years to help achieve this aim on this fragmented farm.  In Spring 2017, Andrew identified a build-up of Digital Dermatitis (DD) related lameness and levels were unacceptably high for him. He contacted Provita and availed of the complimentary parlour and mobility scoring.  After the cows were scored it was confirmed that DD was indeed high with 70% of cows displaying various stages of DD.  Andrew was committed to reducing this figure by all means necessary.

Milking cows are footbathed 5-7 days per week and dry cows and heifers at least once a week. Andrew commented, “regularly footbathing the dry cows and heifers has made a big difference and was quite easy to implement.  I now see less problems with freshly calved animals with DD and lameness and cows calve down with less problems too.  We have new heifer accommodation built on farm for this Autumn and I have made arrangements to have footbathing facilities in it.”