Comments Off on Evidence based probiotics, the gut microbiome and immunity- the scientific and holistic way forward

Evidence based probiotics, the gut microbiome and immunity- the scientific and holistic way forward

Evidence  based probiotics, the gut microbiome and immunity- the scientific and holistic way forward

In recent peer reviewed papers from the international biomedical research journals the gut microbiome is now seen clearly to be a major instigator of immune health, not only for the gut but also for  lung health (Ref 1,2).There are more cells in the body’s microbiome than there are somatic cells in the body. There is more DNA within cells of the gut microbiome directing immunity than there is in the entire somatic cell count of the body.  An optimised gut microbiome will have a higher preponderance of commensal organisms if acted upon directly  by a  proven and quality probiotic (e.g. Provita Protect – the only veterinary probiotic whose claims and proven efficacy have been accepted and authorised by the VMD). This probiotic-enhanced gut microbiome with its higher proportion of commensal organisms in turn will produce higher amounts of SCFA (short chain fatty acids)from the commensals which are now known to be the signalling mechanism from the gut to the body’s immune  systems and especially to the immune system of the lungs.  “Cross Talk” between the gut and the lungs is now a proven scientific concept and is the “buzz word” in modern immunology.  This new concept explains not only the healthier gut and lower incidence of scours seen with a licensed probiotic such as Provita Protect, but also explains the significantly lowered incidence of calf respiratory disease which is also seen as a bonus when calves receive Provita Protect as has been evidenced by farmers who keep repeatedly using the product for this dual effect.   See Table 1 below

The resurgence of interest by veterinary surgeons in proven and effective probiotics as alternatives to antibiotics, has been triggered by a number of recent issues:-

(4) The realisation that prevention is better than cure and that avoidance of disease is better than treating it, both financially and on welfare grounds.

(6) The recent published evidence of the multiple and widespread immunological effects  conferred by  a healthy gut microbiome.

The term probiotic has confused people and a number of veterinarians still regard such substances with a degree of scepticism tending to underestimate the scientific potency of proven probiotic products.  Why is this? Well, the answer is relatively simple.

There have been very many unproven and substandard “probiotics” on the veterinary market for quite a number of years now. The confused situation has  arisen because in the early days, probiotics were defined as “live microorganisms which when administered in adequate amounts  could confer a health benefit on the host”. In other words, it was a ‘possible effect’ rather than a proven effect’.  Furthermore, quality control, characterisation of microorganism strains, shelf life of product , number of strains,   and regulatory approval of manufacturing premises were not required at that time.

Hence, unproven, unsubstantiated, and unreliable products remained as the majority of “probiotic ”products on the market and were  easily accessible  by farmers and vets. The lack of standardisation and the lack of proof of any kind of efficacy for the product made it extremely difficult for the veterinarian to distinguish between what was a scientifically evidence based effective compound and what was a totally useless product.

A number of companies do not identify the types and numbers of viable organisms in their products at the time of use, nor have they any clinical trials performed to validate and prove their product. This possibly leads people into thinking that their products have actually been clinically tested and proven to confer specific health benefits when, in fact , no such evidence exists. The end result is the lack of credibility for the field of probiotics as a whole and uncertainty as to which products may benefit animal patients.

Recently groups of specialist  international  scientists in the microbiome and probiotic fields, mainly in the human sector, have been convening  to review  and discuss the above issues regarding the lack of international standardisation of the term ‘“probiotic”. They have identified the problems and they have set out new criteria in terms of quality controls ,proof of efficacy, and when  the term ‘probiotic product can be properly used .Their findings were recently published in Frontiers of Microbiology (July 2020) (ref 1).

Scientists have set out criteria that attempt to clarify an established industry definition of probiotics, as the team addresses the term’s misuse, which contributes to confusion about probiotic health benefits.

“The term ‘“probiotic ”poses a scientific problem,” says the International Scientific Association for Probiotics and Prebiotics (ISAPP), one of the organisations to take part in the review.  “It does not distinguish between bacterial strains that have a possible health benefit and strains that have a demonstrated health benefit, as shown in studies.

The review also calls for probiotics to be supported by at least one clinical trial preferably followed by confirmatory trial(s).

To correctly use the term ‘“probiotic “to describe such strains, the review states that the organism must be identified at strain level and shown to express the relevant trait. Proper characterisation of the strains, shelf life ,viable organisms and count, and proof of efficacy of the actual product are necessary if the term probiotic is to be used.

Provita Protect – How is it Different?

Provita Protect is the only veterinary probiotic to be authorised and licensed by the VMD.  Copious clinical trial data, veterinary expert reports, and proof of efficacy were submitted in large Masterfile dossiers to the regulatory authorities, in order  to acquire this valued authorisation. In other words, Provita Protect ,uniquely, is a proven animal probiotic product, and is thus  clearly set apart from most other probiotics in the veterinary marketplace.

Amongst the key finding in the field trials with Provita Protect in young calves were the following: 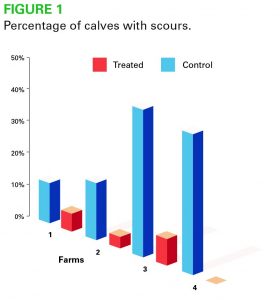 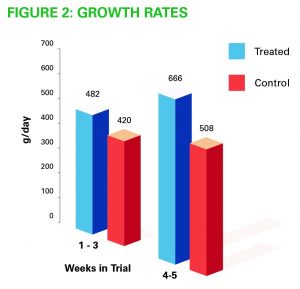 Recent Research on Probiotics and the Gut Microbiome

The optimised gut microbiomes now known to be the director not only of gut health but also of general immunity in the body. Medical research shows the beneficial effects of quality probiotics on commensals of the gut and an augmentation of the signalling from the gut to the immune system via SCFA (short chain fatty acids) and other signalling inducers. “Cross talk” exists between the gut and the lung in terms of the optimised gut microbiome facilitating not just local immunity in the gut but also protection in the respiratory system the brain and other body compartments.  Eubiosis in the gut (i.e. healthy gut flora) is associated with high SCFA whereas dysbiosis in the gut(pathogenic organisms) is associated with a decrease in SCFA. This recent scientific evidence clearly underpins why in the Provita Protect field trials, the treated calves displayed not only a lower incidence of scour but also a lower incidence of respiratory disease. (Refs 2—6)  (Fig 3)

This dual effect has also been noted by customers in the field as shown previously in table 1.  The proven effectiveness of Provita Protect  in protecting  calves from scour and pneumonia, and the resultant heavier weight gains, and improved all-round health status of the treated calves were documented in the Provita Protect Clinical Expert Report ( Barragry 1997,  Ref  7). 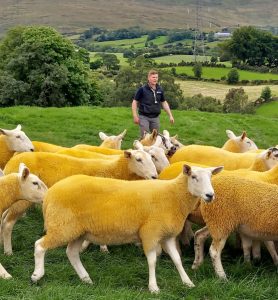 Prior to this, he spent seven to eight years gaining invaluable experience working on and managing various sheep and beef farms across Great Britain before returning to the family farm, where he works in partnership with his father and twin brother, Jonathan as Crockataggart Farms.

Throughout August and September, he will be selling gimmers through local marts, getting 2020-born lambs finished and making plans to get next year’s breeding ewes ready for tupping.

With over 750 breeding ewes and 600 gimmers grazing predominantly hill and mountain ground at the minute, Eoin wants to maximise the returns from this large flock, so a big focus is placed on animal health so each sheep has the best chance of hitting its potential.

Two key areas at this time of year are reducing flock lameness and boosting their vitamin and mineral status.

All sheep groups are regularly footbathed; at least every fortnight and every time, a mob is gathered for dosing, vaccinating, or moving.

Provita Hoofsure Endurance is their footbath solution of choice as it is easily mixed, sheep can be simply walked through it and it is proven to be very effective.

Hoofsure Endurance is a concentrated solution requiring only 1 litre in 100 litres of water making it very cost-effective.

The farm also uses Hoofsure Combat spray for scald and foot rot cases on sheep that are noticeably lame.

Eoin is quick to point out that taking a preventative approach with regular footbathing saves a lot of labour in the long run because they have to catch fewer lame sheep and the sheep are standing and moving correctly.

Despite the recent wetter conditions and muddy areas in fields, lameness has not spiked within the flock and Eoin puts that down to consistent use of Hoofsure Endurance.

As the summer grazing season starts to come to an end, grass quality will begin to decline, resulting in trace element intakes also dropping.

This can have a bigger impact in hill ground, which is generally poorer in nutritional value, which can impact the thrive and weight gain of all stock – especially lambs.  Therefore, Eoin and his brother will give lambs born this year at least three vitamin/mineral drenches, at ‘marking up’, shearing and weaning with Provita’s high spec 26 trace element ProVitaMin.

This will boost the lambs trace element levels, so they make the best use of forage intake to keep putting on plenty of much needed weight and flesh.

Also, gimmers presented to sales will also be drenched with ProVitaMin to give them that attractive bloom and tightness in the fleece.

Furthermore, buyers should be confident that the sheep should suffer little setbacks and continue to perform when introduced to their own flocks.  Customer satisfaction is important to Eoin when selling any of his stock.

Tupping at Crockataggart farms starts late October aiming for early April lambing onwards.  Although pre-tupping planning starts now, with breeding ewes selected and then in mid-September, all ewes and rams are given a pre-tupping ProVitaMin drench to optimise fertility and boost scanning rates.

Eoin was happy to see the first year using ProVitaMin generating a 12% increase in scanning rate, hence why it continues to be a part of the pre-tupping schedule.