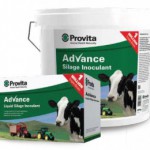 Weather permitting, renowned Co Down suckler beef producer Sam Chesney will be cutting silage in a fortnight. But it’s the performance of silage made four years ago that has really caught his attention over recent days.

“Like many farmers I ran out of last year’s silage stocks some time ago and had no option but to feed out from a pit that was made back in 2009,” he explained.

“And I was totally surprised at just how good its feeding value is. In fact, the forage is as well preserved today as it was when first ensiled. I attribute this, for the most part, to the use of Provita’s Advance inoculant, which we have applied to all the silage crops made on the farm for the past decade.”

Sam went on to highlight the tremendous benefits to be gained from making good quality silage.

“Two obvious examples come to mind in this regard,” he continued.

“I am committed to calving replacement heifers down at 24 months of age. This means securing growth rates of around 0.75 kilos per head per day. However, we can achieve growth rates of between 0.7 and 0.9 kilos per day from silage alone during the winter months. This means that we don’t have to feed meals at all to our weanling heifers throughout the housing season. However, the silage on offer to them is of an exceptionally high quality.

“We finish a number of the male calves born on the farm as young bulls. Last year, they killed out with an average carcass weight of 390 kilos at between 15 and 16 months of age. During the finishing period they received a diet comprising top quality silage and an average of 8 kilos of meal per head per day. In fact the average meal bill for the group worked out at only £226 per animal. Again, the weight gain achieved from the silage alone was more than significant.”

‘Advance’ inoculant  combines three unique strains of bacteria to optimise silage  production across a range of environmental conditions. The bacteria are  supported by a supply of enzymes which help release sugars to give more  reliable fermentation, particularly in years where sugars level may be lower  than normal. To give the bacteria a kick start and ensure a rapid  fermentation, there are also some free sugars in the additive.

“In independent trials, treatment of silage with Advance resulted in silage  at pH4 after 24-48 hours rather than four to five days,” explained Provita’s Tommy Armstrong.