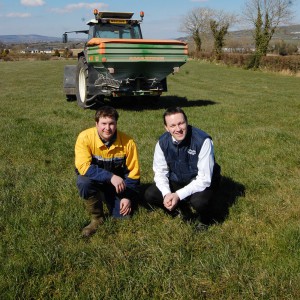 This week saw the 2013 UGS Grassland Farmer of the Year Albert O’Neill, from Artigarvan in North Co Tyrone, sowing fertiliser on silage ground. However, preparation for this year’s silage season got underway prior to Christmas when all the relevant fields were soil tested.

“We produce about 2,000 tonnes of grass silage each year and grow an additional 30 to 35 acres of arable silage,” Albert told Farming Life. “Soil testing is the all important starting point to our entire farming operation. Our arable fields are tested annually: the grassland areas are tested every four years. We are also committed to a regular grassland re-seeding policy, which ties in with our arable rotation. On average fields are re-seeded every five to six years Albert milks 190 Montbeliarde cross cows with his brother Wesley and father John. It’s very much a family run business.

Despite the bad weather in 2012 the O’ Neill family managed to make three cuts of more than acceptable grass silage.

“We lime regularly to keep the pH at optimal levels. Fertiliser can then be applied on the basis of the exact crop requirements.” Albert commented

Increasingly, we are applying a number of crop nutrients as straights. For example, all the silage ground received a dressing of muriate of potash some weeks ago. We also apply straight Sulphur in the form of Brimstone 90. By taking this approach, it is possible to increase protein and yields in the silages produced.”

All the designated silage areas are cut at the one time. Weather permitting, a 24 to 48 hour wilt will follow, after which the grass is ensiled.

“The clamp is rolled regularly throughout the ensiling process and covered as soon as the contractor’ leave the yard. By taking this approach, we have managed to eliminate waste within the clamp almost entirely.”Albert O’Neill stressed.

The quality of last year’s silage speaks for itself. Analysis confirms that the first cut, taken in mid May, had an average dry matter of 29.0% with a D-vale of 71. The protein level was 15.0% with the ME figure coming in at 11.8.

“Our second cut was taken at the beginning of July,” Albert confirmed.

“Due to the poor weather at the time, this was a direct cut operation. However, the fermentation pattern achieved was still very acceptable. Our third cut, which is taken in September, is always made into bales.”

Albert also pointed out that grass, which gets ahead of the cows during the grazing season, is also made into big baled silage. A number of fields which do not receive a very heavy dressing of fertiliser are kept to produce a higher fibre silage for the dry cows.

One overarching theme to the O’Neill family’s silage making programme is their use of the ‘Advance’ silage inoculant, manufactured by Provita in Omagh. It is supplied by local agricultural merchant Alan Holden.

The company’s Tommy Armstrong, who visited the O’Neill farm earlier this week, takes up the story:

“I am very impressed with the level of grass on the O’Neill farm this week in what has been a very difficult spring, this is testament to the efficient grassland management on the farm.

“Advance combines three unique strains of bacteria to optimise silage production across a range of environmental conditions. The bacteria are supported by a supply of enzymes which help release sugars to give more reliable fermentation, particularly in years where sugars level may be lower than normal. To give the bacteria a kick start and ensure a rapid fermentation, there are also some free sugars in the additive.

“In independent trials, treatment of silage with Advance resulted in silage at pH4 after 24-48 hours rather than four to five days,” he explained.

“This resulted in less losses, 1.1 units of extra ME and 0.4 units of extra protein. In terms of performance, the benefits of this extra quality were 15% higher silage intake, 1.3 litres of extra milk and a 5.3% increase in milk protein. The net benefit was a return of at least four times the cost of Advance. This represents exceptional value for money.

Advance comes in both granular and liquid formulations to suit all types standard applicator. The inoculant can be used with self-propelled and trailed harvesters and forage wagons, applicator deals are also available.

A special offer is available for early orders, one Balmoral show ticket is available per 500 TT of silage additive ordered.