Bud Guard 500ml contains organic acids and essential oils (antibacterial and antifungal properties).  It is antibiotic free and It contains a unique film-forming agent that creates a water-proof barrier to help prevent contamination and aid quick healing.  The physical barrier from the spray helps to seal the area and reduce bleeding, if accidentally hit by calves when returned to pens or pasture.  For use once calf has been properly debudded with hot iron under anaesthesia.  It is simple to use, spray until area is sufficiently covered. 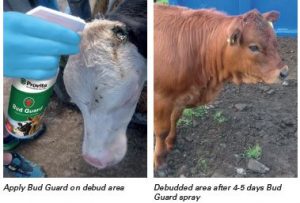 Horned cattle are a major management problem on farm, causing significant risks for both handlers and other stock.  Therefore calves should be debudded as soon as possible to avoid unnecessary dehorning procedures undertaken by vets only.  Dehorning does carry greater risks due to handling and side effects like cattle not thriving as well after due to the pain and stress.

Debudding is less likely to see regrowth of horn tissue as smaller buds are easier to remove completely by hot iron which is the preferred method.  Also there will be less problems and impact on thrift after debudding younger calves as appropriate anaesthesia and pain relief under adequate restraint can be done easily.

Comments Off on Vital Boost: OVER 3 litres of milk EXTRA at 60 DIM

Vital Boost: OVER 3 litres of milk EXTRA at 60 DIM

100 cows or heifers (1st to 7th lactation animals) recruited to the trial between November 2018 and March 2019.  50 cows would receive Vital Boost feed and 50 cows would receive nothing. All cows got same feeding, housing, vaccinations and other routine management.  The milk yield and fertility parameters for followed for each cow or heifer with the following results recorded: 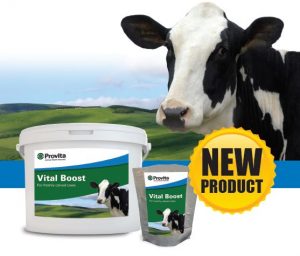 Comments Off on Dairy Winter Housing: Getting on Top of Lameness and Keeping it Low

Dairy Winter Housing: Getting on Top of Lameness and Keeping it Low

Andrew Dale milks 110 Fleckvieh and Fleckvieh-cross cows near Limavady in partnership within his parents.  Rolling yields are around 6,500 litres with the aim to breakthrough 7,000 litre threshold soon.  The farm is focused on maximising output from forage with extended grazing and quality silage made.  Zero grazing has been introduced in the past two years to help achieve this aim on this fragmented farm.  In Spring 2017, Andrew identified a build-up of Digital Dermatitis (DD) related lameness and levels were unacceptably high for him. He contacted Provita and availed of the complimentary parlour and mobility scoring.  After the cows were scored it was confirmed that DD was indeed high with 70% of cows displaying various stages of DD.  Andrew was committed to reducing this figure by all means necessary. 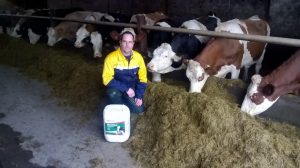 Milking cows are footbathed 5-7 days per week and dry cows and heifers at least once a week. Andrew commented, “by regularly footbathing the dry cows and heifers has made a big difference and was quite easy to implement.  I now see less problems with freshly calved animals with DD and lameness and cows calf down with less problems too.  We have new heifer accommodation built on farm for this Autumn and I have made arrangements to have footbathing facilities in it.”